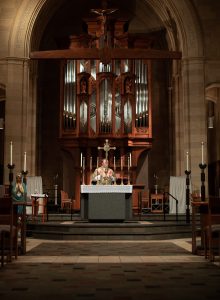 from the Organ Builder 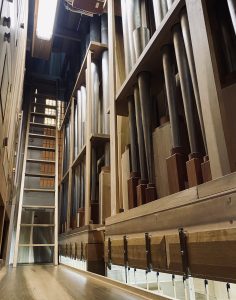 With great trepidation, I agreed to build an organ for Sacred Heart Cathedral. Once I had attended a concert there given by Harald Vogel on the John Brombaugh Opus 9 organ, an extraordinary instrument on temporary loan to Sacred Heart. This was the very instrument that influenced me to become an organ builder more than thirty years ago and now I was commissioned to build an organ to take its place. Added to this pressure were the expectations of the congregation at the Cathedral, plus those of the greater musical community of Rochester, including the prestigious Eastman school. All this weighed heavily on me as I began the two-year design process, followed by the eighteen months of exacting construction, in order to complete the organ to be dedicated tonight. I hope you find it a worthy instrument. 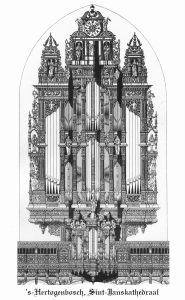 While not an exact copy, the Cathedral’s organ case is inspired by the famous organ in St. John’s Cathedral, Hertogenbosch, The Netherlands. Begun in 1617, this instrument is a masterpiece of design and beauty. While our organ case is about half the size of its inspiration, it is roomy enough to accommodate four divisions and almost four thousand pipes. The case consists of white oak frames, moldings and panels, which have been fumed with ammonia to darken them, accelerating the natural aging of this fine wood.

The oak carvings of St. Cecilia (left) and Miriam (right) are in the style of the original Dutch carvings on the Hertogenbosch organ. They were done by Robert Voit of Germany. Also modeled after the Dutch original are the baroque cherubs and swirls carved by Andreas Rink of Dresden, Germany. 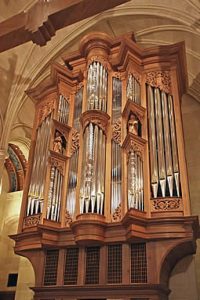 The façade pipes are arranged in towers and flats in complex ways, fulfilling two design goals: defining the divisions of the organ; and keeping the eye busy finding the many relationships between the placement of the large and small pipes and the positions of the pipe mouths and corresponding feet lengths and carving boarders. The carvings cover the spaces above the pipes but also contribute to the composition by forming lines of sight between the sections. Lastly, some of the façade pipes are embossed following old Dutch traditions. The design is scribed inside before the metal sheets are formed round and when formed the metal tends to bend along these lines. After the pipes are soldered together the facets are burnished in.

The actual construction of the organ took place in my Tacoma, Washington, workshop. 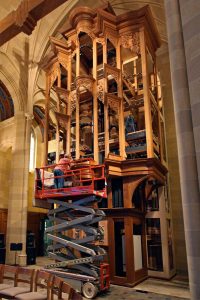 There, ten of us worked for a year and a half making virtually every part of this organ—from pipes thirty feet long to those the size of a pencil. We followed processes perfected hundreds of years ago. Molten metal is cast into sheets on a table, measured for thickness, planed or hammered smooth depending upon the alloy (either 95% tin or 98% lead), cut into pieces, hand-formed over mandrels and soldered together. 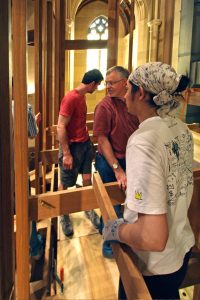 When completed, the organ case and pipes were disassembled, packed into a large moving van and shipped to Rochester, where more than one hundred volunteers unloaded the thousands of parts six days later. Over the next two and a half months, six of us from the Tacoma workshop re-assembled the case, windchests, and wind system and installed four thousand pipes. These were then voiced for this space and tuned to perfection. 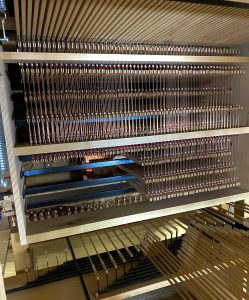 Like all the great period organs, the new Cathedral organ has totally mechanical key and stop action. The keys are actually hinged levers that hang from small strips of wood called trackers. These extend up to the valves of the windchests. When the player presses the keys, these valves immediately open and pressurized air flows into the pipes depending upon which stops are drawn. This simple system is both sensitive and extremely durable. It also enables subtleties of touch to influence the way the pipes sound.

Four large hinged bellows situated in the hallway behind the organ supply wind to the instrument. A turbine blower fills them with wind and, as they rise, a valve begins to close off the wind supply. The bellows find equilibrium and regulate the wind demands of the organ to a high degree of accuracy. Weights on the bellows determine the pressure—for this organ it measures 80 mm, water column.

It has been a honor to be entrusted with the opportunity to create something beautiful for Sacred Heart Cathedral. I extend